Blog Statistics All we want for Christmas is normality 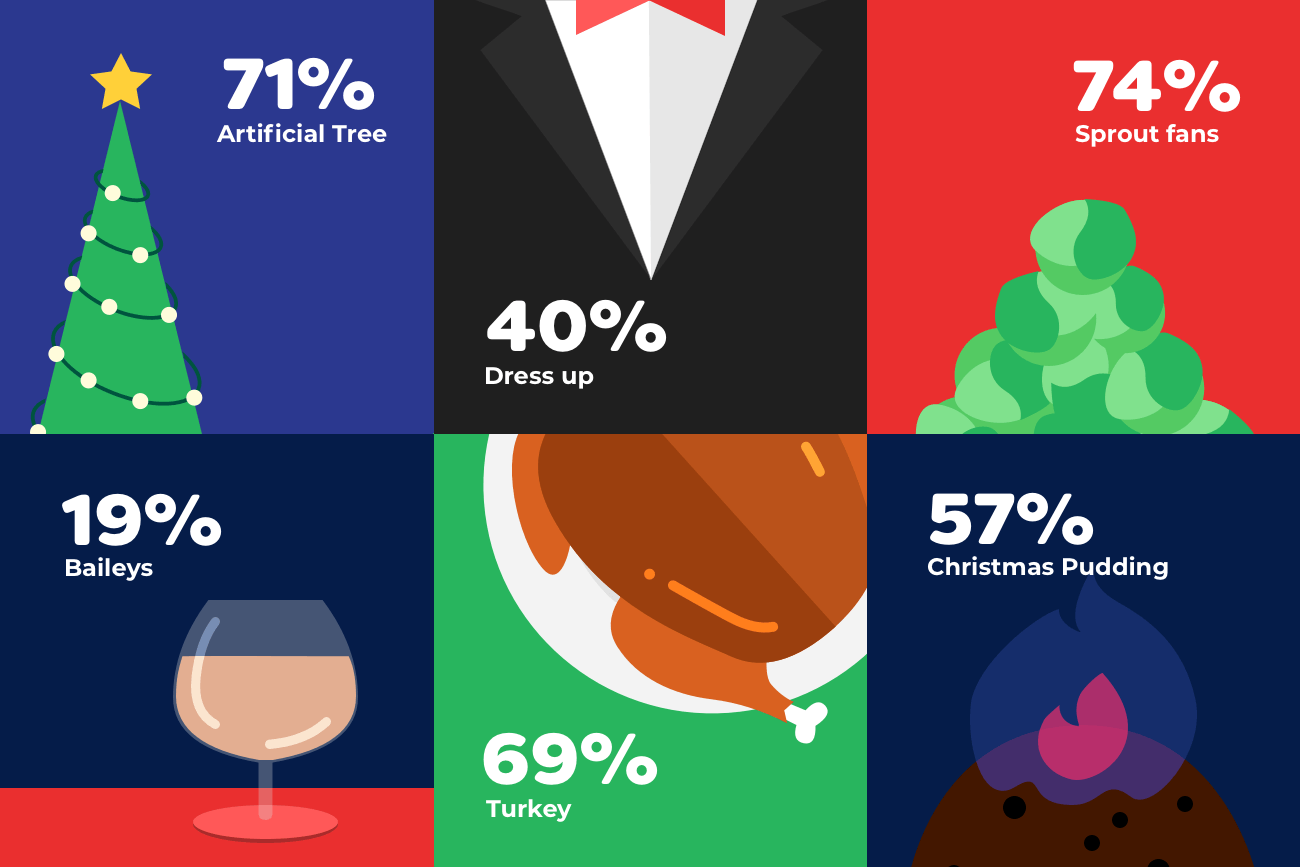 It’s a handful of sleeps until Christmas, so finally permissible to talk about Christmas in the virtual PMP office. In fact, we’re having a virtual staff party this evening including a “Quizmas” lovingly compiled by the office Kat. My grinchiness stems from working in retail as a student over Christmas holidays, but even that sounds kind if nice right now. It’s the most exceptional time of year, but we’re all craving normality. So, we thought it would be nice to ask what’s normal for you on our Survey Draw.

Clothes
A shocking 13% of Londoners lollop around in their PJs for the day, compared to 7% nationally. Half of Scots dress up for the day, while only two in five of the rest of us do. Half of us dress “Normal”, including one of our team members, who dresses like an elf all year round.

Sprouts are less divisive than we expected, with only 26% turning up their noses, though 34% in London. In Northern Ireland, most (57%) have another Christmas dinner from the leftovers, while 25% shove it in a toastie!

And there you have your normality for Christmas.

Apologies on behalf of 2020. Next year may only be a slight improvement, but it will feel much better. Stay safe, and have the best Christmas possible.

Another (🤔) interesting year is over. 2021 was, of course, dominated by the pandemic and has ended in a cliffhanger as our scientists (🙏) work out quite what this new variant is up to. But, we’ve ended the year mostly vaccinated, having started it only a couple of days after the first vaccine was approved. And… PMP members collectively claimed over £283k for free! … Read more

Since there hasn’t been an election or referendum for nearly 9 months, we thought we’d share some of the more interesting results from our Survey Draw. A few if you have been asking whether you can see some of the results. Well, you’re in luck! … Read more

Are we drinking through the crisis?

A week or so into lockdown, flicking through Twitter with one hand and supping a cold beer with the other, I was stunned to see this: I know everything’s a bit strange and everyone’s doing whatever they can to cope, but please, please go easy on the drink. I know some people won’t like me … Read more

A few weeks ago PMP super-boffin-and-comment-addict Dave Moore produced a map of the UK plotting wins on PMP since we launched in 2011. It showed that if you feel aggrieved about not winning, you’re probably a sheep. Now, he’s created these two lovely maps to demonstrate the correlation between registered postcodes and wins, hopefully putting the conspiracy theories to bed for good. Let’s see…. … Read more

Why doesn't my area ever win?!

Since we launched in 2011 we’ve been on the receiving end of a highly dispersed mob of self-diagnosed victims of geographical bias. ‘Why are the winners all from down south?’, ‘Why are they all up north?’, ‘What has Stevenage ever done to you?!’ Our stock responses explain that we have no reason to favour one area over another and, if we did, we’re not clever enough to do it. … Read more