Blog Bonuses Our Biggest Winner Ever!

Diane from Somerset has won the biggest pot in Pick My Postcode History!

Our previous biggest-ever winner was Sharon from Bradford back in 2018, who won £2500 on the main draw. But unlike Sharon who only had a bonus of £14; it was Diane’s dedication to building her Bonus of £3,335 that made her our new largest-ever winner!

Your bonus is an additional pot of money that is paid out on top of your winnings. 3p is added daily by checking the draws, but you can also build it by doing additional surveys and offers. If you want to build your bonus as Diane has done you can check out our previous post on the best ways to build your bonus!

Diane has been a member of Pick My Postcode since 2014 and previously won in 2018 on New Year’s Day. While her previous win was only £35, she stayed on and it’s a good job she did now!

She said: “I would have loved to have donated my winnings to one or more local charities but unfortunately, in the current economic climate I would like to keep some money for myself and my grown-up family, three beautiful adult daughters.

“However, as things stand ….. a chunk will be put towards my necessary new windows, some will go to my daughters and I will support two local charities.” 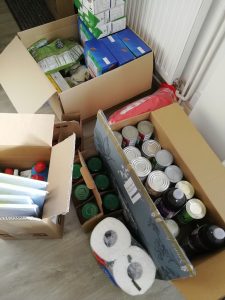 Diane used part of her winnings to give a donation of food and other household items to Shepton Mallet Food Bank – an amazing thing to do in a time when so many people are struggling.

“If there is any left, I might consider turning the central heating above 15ºC for a week or two in the depths of the coming winter.”

In 2017 she moved to Shepton Mallet, Somerset but never changed her postcode on site from her old one, snagging her the big win!

When talking about the disbelievers, Diane exclaimed: “Carry on and stay hopeful! Oh, and more importantly, be kind.”

We are all so happy that Diane’s commitment to stay on was rewarded and hope that all of you take a page out of Diane’s book and maybe you’ll have the same luck as her!

Fingers crossed, you’ll be next…

A woman from Telford, Shropshire wins for the second time! … Read more

Why you should grow your Bonus!

Did you know that around 40% of the money we give away is member’s Bonuses? … Read more